Problems with iPhone, iMessage and calling 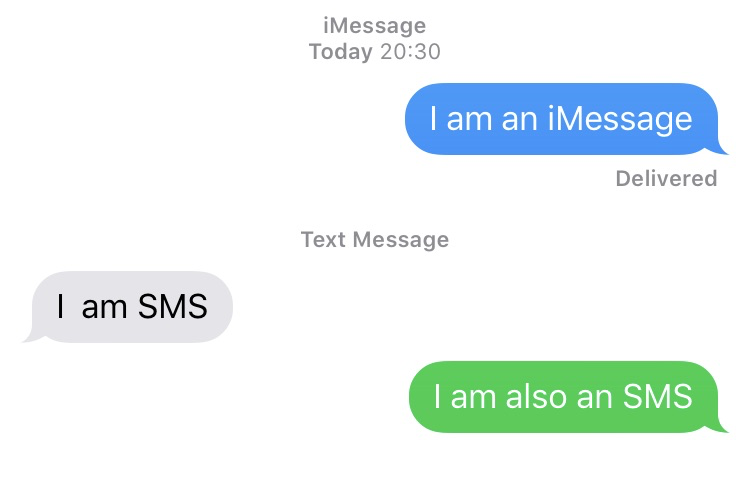 Sms not sending or not being received.

Occasionally we have customers report one or more of the following problems, Almost invariably this will affect iPhones that have been handed down from a parent.

Quick Solution: The problems will almost always be fixed by resetting the iPhone to Factory Settings and setting it up from scratch with a new iCloud account that is unique to the phone; and by making a couple of settings adjustments to the phone. This is usually the safest method but we’ll try and explain here what is going on, as understanding the causes of the problem can help. So if you don’t want to go with the reset option, read on…

iMessage is not SMS

iPhones are equipped with a ‘unified messaging’ platform they call “Messages”. Imaginative. This application can send regular SMS – that are send and received over the cellular network asynchronously, and iMessage which is an encrypted, synchronous, internet-based instant messenger.

In their wisdom Apple have made the two virtually indistinguishable from each other – as a rule, save the colour of the message bubble. A blue bubble for sent iMessage and a green bubble for sent SMS and a fetching ambivalent grey for incoming messages. Because Apple knows you probably don’t care much what it is apart from what it says. They are so alike it’s not unusual for new Apple users to be unaware that there is even a difference.

Different versions of iOS or an old iPhone?

If the iPhone that is having difficulties has a different version of iOS to the parents’ or friends iPhones, this is a well-known Apple problem. Compatibility is added eventually – usually, but remember Apple wants everyone to buy a new iPhone every 2 years at most. An iPhone that was supplied on a contract 6 years ago and has been sitting in a drawer for the past 3 years, is almost certainly going to have an old version of iOS, and compatibility is not guaranteed!

Anyone who has had iPhones for many years knows that Apple definitely has a policy of helping old phones head into retirement and encourage a purchase of the latest model. Old phones also suffer from battery issues and crashing phone radio circuits causing dropped or failed calls.

Apart from their different methods of delivery – iMessage needing a data connection, either Mobile Data or WiFi – and SMS not, the biggest difference between the two message types is that iMessage is a Synchronous messanger ( ish! ) and SMS is asynchronous.

A Synchronous message relies on both the sender and receiver of the message to be attached to a data connection at the same time. It means you can get instant feedback and confirmation that the message has been received, and potentially if it has been read. You can also often see the remote party is interacting with the message by seeing the familiar ‘i’m typing dots’.
On the face of it that seems like something you’d always want. But if the remote user is unavailable due to being in a blackspot, or turned off, the message cannot be delivered in real time so the network will either have to inform you that the message can’t be sent or will have to introduce an amount of cacheing. It’s not really designed that way, so it gets all a bit clunky.

An SMS is born asynchronous. When you send an SMS it is sent to an SMSC ( SMS message centre ) which waits for the phone to connect to a network and request messages be spooled to it. The advantage of this is it copes very well with phones being turned off for very long periods of time. The downside is the feedback about the messages being read is far less instant and reliable, and occasionally messages can spool out of sequence.
If you have a phone with no mobile data, or data that is restricted – say while the phone is at school – an Asynchronous messenger is far more appropriate.

Setting up iMessage for use with SMS

With the right settings and an understanding of what is going on, it’s perfectly possible to use SMS and iMessage and they will play very nicely together with a little help. It’s most important to have all the Apple devices in the household set to Send as SMS when iMessage isn’t available.

The Second big difference between iMessage and SMS is the flexibility of target address.
With iMessage it’s possible to use either the phone’s mobile number, or the phone’s iCloud email address as the ‘target’ for the message.
If you are using iMessage exclusively, then this doesn’t really matter, but if you are using iMessage AND SMS together then it’s vital that you use only the phone’s mobile number as the target address. If you use both, then at best you end up with multiple message threads going on, and at worst, you will have failed messages.

The setting for this is under Settings –> messages –> Send & Receive

Quite often the iPhone will start a new message thread using the iCloud email address as the identifier rather than the phone number. This means any replies will go back to iMessage using the email address. SMS, being send to the number and not the email address will go into a different thread. iPhone with non-Apple friends will likely be familiar with this behaviour already.

If a contact record just contains an email address and you have now disabled iMessage on a phone to the iCloud email address then you aren’t going to be able to message by a name search – you’re going to have to type in the mobile number. Resetting the phone and starting again won’t do any harm.

It’s also worth standardising the number format. You can store an 07nnnnnnnnn number and the same number as +447nnnnnnnnn against the same record. iPhones are notoriously bad at automatically divining the source country from the phone number so we store all ours as +44 numbers.

The biggest and most common problem with a ‘handed down’ iPhone is likely to be the fact that the phone may have the Parent’s iCloud account as its identity.
The reason this causes unexpected behaviour should start to become clear when you bear in mind the points above and the way iMessage works.

If you have multiple iPhones with the same iCloud account and you send an iMessage to that iCloud address or a phone number linked to it, it’s impossible for Apple to know which of the devices the message is intended for, and distinguish whether the message should be send as iMessage or SMS. The results are highly unpredictable.

The other issues with having the same iCloud address for a child’s phone don’t stop there of course – it also means you have given your child the tools to lock and wipe your own iPhone and authenticate your spending, and delete all your backups and music and any online content. But let’s not worry about that right now.

Another unexpected consequence of having the same iCloud address for your phone and your child’s phone can be your calls unexpectedly being delivered to your child’s phone and vice versa. You can turn this off in Settings –> Phone –> Calls on other devices, but far better to have different iCloud accounts and be done with it.

You are adding a new Phone Number…

When you insert a new SIM in an iPhone, the iPhone sends a verification SMS to apple to inform apple of the new number to associate with that phone’s iCloud account. Apple sends one back to the phone with conformation. You will see these in the ParentShield Portal – they’re normally hidden secret messages but we ‘unhide’ system messages so you can see them. It’s a useful feature and allows you to spot suspicious activity.

Apple will then pop up a message on the screen of every iOS device with that iCloud account to confirm adding the new number to that iCloud account. If you recall seeing these pop-up messages but can’t remember what was selected it’s worth checking Send and Receive under Settings –> messages to double check.

People sometimes will point out the advantages of having a ‘family’ account. The ability to control spending is the main one. You don’t want to have to load your credit card onto your child’s iCloud account to make it easy for them to make purchases from the iTunes store.

Fortunately Apple has solved this by allowing you to have separate iCloud accounts for the phone’s identity and for the purposes of iTunes.

Under Settings you can specify which account is used for what. It’s well worth becoming familiar with the different accounts so you know which one to use for the find-my-iphone feature.